By IMPD Mounted Patrol on September 14, 2016 in Leadership

If you could choose any place to live or build a business 18 years ago, Fountain Square was likely low on the list. Mike Halstead saw a glimmer of opportunity there for his new architecture and planning business. “Even if this neighborhood doesn’t rebound,” Halstead told himself, “the price is right, it’s an historic district, it’s close to Downtown, and it has a shared parking lot with the police. Unless you’re a criminal, this is great!” For Halstead Architects, it’s paid off. 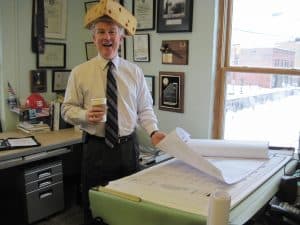 Mike Halstead at work, after having lost a bet the Bears would beat the Packers.

Mike Halstead graduated in 1987 from the Ball State University College of Architecture and Planning. After working for another architecture firm for a few years, Halstead started his own firm 24 years ago that focuses on not-for-profits. Halstead opened a second office, in Marian, Indiana, about 8 years ago.

Over the past two decades Halstead has seen a remarkable transformation in Indianapolis and its neighborhoods. The business’ home of 18 years in Fountain Square has probably seen the most remarkable transformation of any neighborhood in the city. But one thing that hasn’t changed much in the same span of time is creating a permanent home for the Indianapolis Mounted Patrol unit.

“Probably three years ago we started doing work at the former Central State hospital grounds for Chris Piazza. Chris was a developer that wanted to restore some of the historic buildings there. We helped on the center grounds, which is now occupied. [Chris] had talked to IMPD about moving into the old laundry building and our relationship with the Mounted Patrol has grown from there,” says Halstead.

The Mounted Patrol is not a tax-funded entity beyond the officer’s salaries and some crucial basics like food. The horses, facilities, upkeep, and healthcare of the horses is the responsibility of the IMPD Mounted Horse Patrol Association, as well as training and seminars for officers. This arrangement protects horses from being treated like city property at the end of their careers and from requirements that they be auctioned off like old police cars or other equipment.

“I started as a consultant and they later asked me to be on their board”, says Halstead.

Halstead and his firm of 10 architects have helped guide the Mounted Horse Patrol Association through a 2.5 year-long property swap and acquisition process that is about to be completed. The new grounds on the near west side will be used for new stables and facilities for officers.

“I think once they have a permanent home and a permanent structure people will appreciate more what they do and the service they provide,” says Halstead. Without hesitating he continues, “There’s no question they’re underappreciated. If you’ve ever been to an event with the Mounted Patrol, having them there changes the environment so quickly. You come up in a police car, people get negative and aggressive. But trot up on a horse and it calms everyone down. I don’t know what it is. The horses just change the whole context and dynamic.”

Halstead hopes that as Indianapolis becomes more urban and new transit develops brining more residences and people downtown, that even IMPD itself sees more value in the service of the Mounted Patrol. 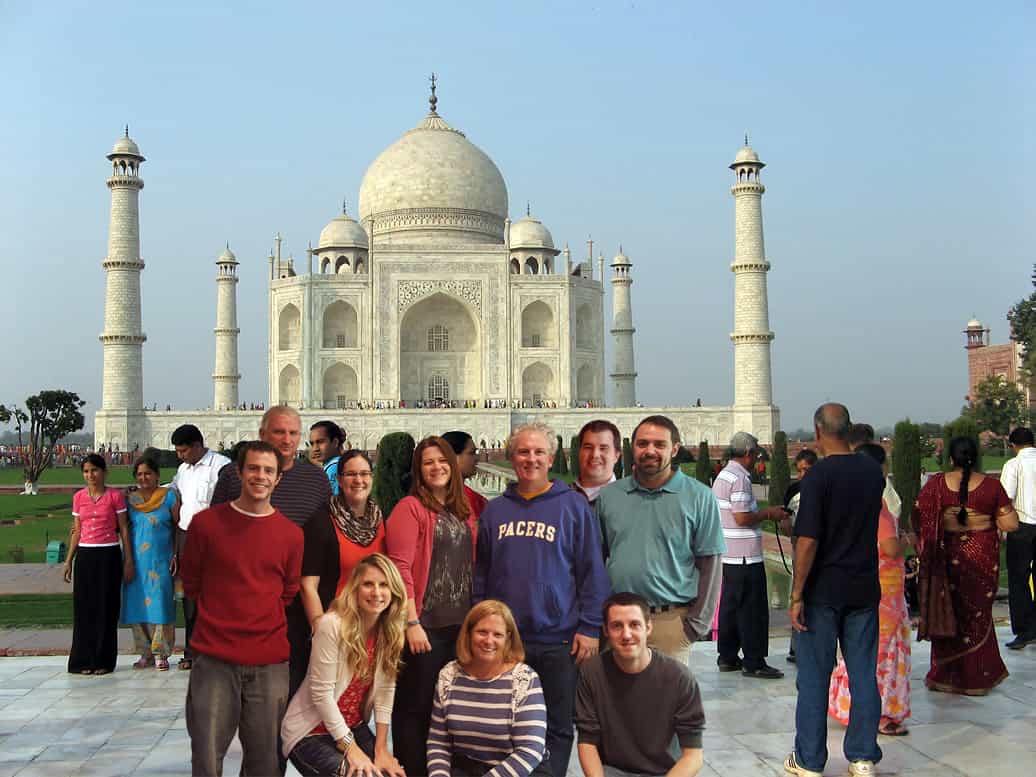 Halstead Architects team members, “on vacation” at the Taj Mahal.

“Having a structure is a thing of pride and responsibility. It’s an awareness of what they stand for and what they do. I think in the temporary and dilapidated trailers they’re in now it makes it difficult for them to aid the public. I mean, can you imagine bringing an elementary school to their current facility? You can’t even tell them the history because there’s no way to display historic memorabilia,” says Halstead.

Halstead’s firm has the experience to know that not-for-profits working out of sub-standard facilities don’t garner respect from the constituents they’re there to help. Halstead remarks, “We find that in a lot of work with mental health, social service and community based not-for-profits the facilities the clients come to is worse than them couch surfing, so why would they go there?” Adding, “It’d be like having police officers driving 25-year-old cars they’re constantly band-aiding. How could you view or trust them as professionals?”

“I moved my business to a building in Fountain Square 18 years ago in what was basically one of the last underdeveloped areas in Indianapolis because there was a police department across the street,” says Halstead, mentioning public safety drives so much of what business does and where they locate jobs.  “No one locates a business or home in an area that’s underserved by the police because you think it’s a good business decision – you do that out of necessity and cost.”

Looking ahead as fundraising efforts begin in earnest, Halstead beams, “I’d like for this project to be like most all of our projects: that once it’s accessible the first thing they complain about is they’re outgrowing their space. That’s how I know we’ve been successful.”

The Mounted Patrol Association is seeking donations for the facility, which will largely be paid for with private funds. Donation forms and more details about the facility plans are available now.