IMPD Mounted Patrol Officers in Downtown Indianapolis along Washington Street during a KKK rally in 1993.

The duties of an officer serving in IMPD’s Mounted Unit are different from most police officers. Mounted Unit officers handle bales of hay, bags of shavings, clean stalls, train and ride horses, make public appearances, and are the face of IMPD and the Mounted Unit during large events. With this in mind, the officers being considered for a place on the Unit undergo an assessment process judging their proficiency, physical fitness, speaking ability, and appearance in uniform.

Once selected, a mounted officer participates in 16-weeks of training. In addition, Mounted Patrol officer have attended the Royal Canadian Mounted Police School in Ottawa, Ontario, the National Mounted Police Colloquium in Lexington, Kentucky, and the New Orleans Mounted Police School. The Unit has received numerous awards across the country — from Philadelphia, Pennsylvania, to Mobile, Alabama. The IMPD Mounted Patrol is known as one of the best units in the country and has consistently placed in the inspection, equitation, and obstacle course classes.

Horses used in the Mounted Patrol Unit are primarily draft crosses. The draft horse is a solid and reliable mount but is too large and heavy for long rides in the city. When crossed with a smaller horse, the draft cross can adeptly handle all of the situations expected of a police horse. The horses must be at least 16-hands (about 5.5 feet) and have a quiet disposition. Many of our young horses have been acquired from Angola State Prison in Louisiana. There, the prison specializes in breeding, raising, and training draft crosses for police and service work throughout the United States. 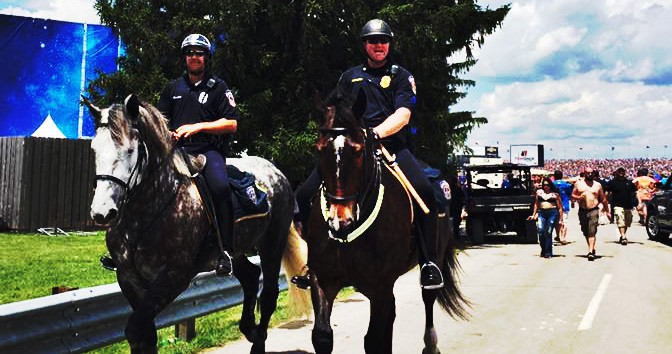 Police horses are trained like other horses for basics such as accepting a rider, turning, stopping, and moving. Police horses are then further trained to overcome every basic instinct they have. Police horses are trained not to run, jump, or kick in unpredictable scenarios or around loud noises such as traffic, gunfire, or sirens. Training also includes “desensitizing” horses so they become acclimated to walking through puddles or water of unknown depth, touching unfamiliar things, jumping up to 18” on demand, and walking over material they wouldn’t normally, like logs or plastic. Horses that demonstrate an inability to cope with these demands are rejected as police horses.

IMPD’s police horses are also trained to use their body as a “moving wall” and other crowd-control measures. All of this training isn’t without pain. Officers are often thrown, hurt, and scraped early in training with their horses. The officers spend even more time training in equitation, learning how to ride, and are routinely complete novices to horseback riding when joining the Mounted Unit. Cumulatively, Officers train over 640 hours in their initial job training.